I tried to be a teacher once. I decided I’m not very good at it. But I sure had a load of fun using the programming tool Scratch.

Some background: Growing up in the early 80s there were few people that could teach me programming. At school the job usually went to the maths teacher but they were as much fun as hair loss. Despite this I was instantly hooked and taught myself (badly) but I always wished for better tutors. For years I’d promised myself “I’m going to make the world a better place and teach kids to make games”… ‘cos that’s my idea of a better world…
Now, of course, you can’t browse to a random web page without tripping over another programming tutorial but at the time it seemed like an exciting quest.

Fast forward to 2015 and, with children of my own, I decided it was time to pass on my ‘legacy’. And so I came across Scratch. 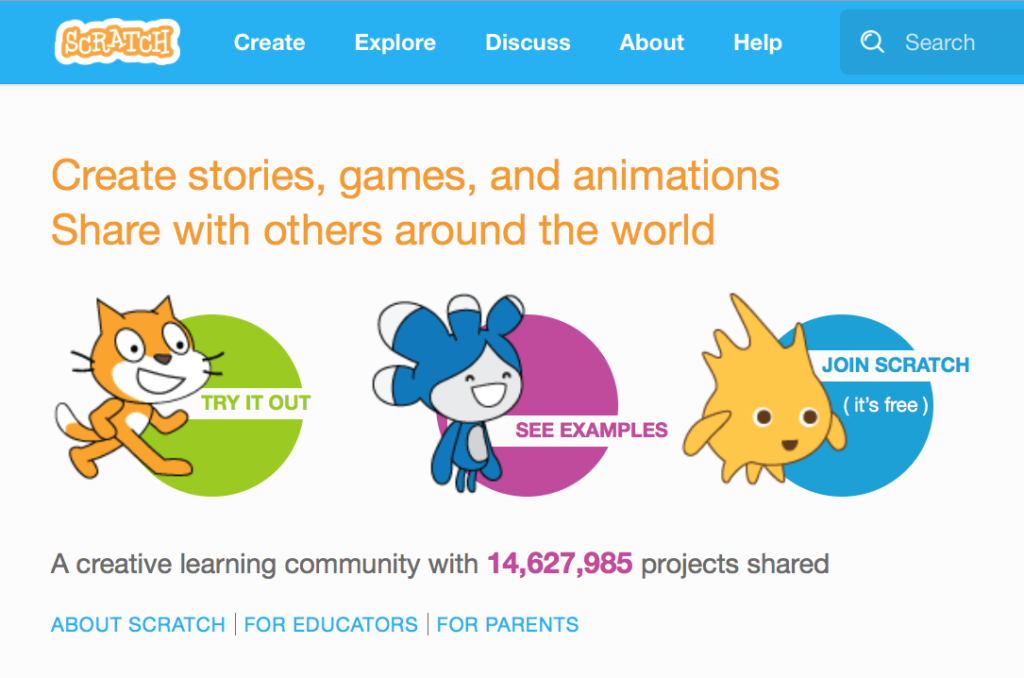 Targeted at children aged 8 to 16, Scratch has been evolving since 2003. It uses a web-based drag and drop interface, but rather than building with pre-made items, proper ‘instructions’ are snapped together to form the program. Wait… where are you going…
Loops, branching, variables and functions. It teaches all the fundamentals without dumbing down to the point where the concepts are lost.
To quote from their About page “With Scratch, you can program your own interactive stories, games, and animations — and share your creations with others in the online community”. The community is enormous, now exceeding 11 million registered users.

To begin with I tried it on my 7 year old son and he soaked it up like a sponge. We’ve made a number of games together, with varying input from me. He’s really enjoyed the process and gets some great feedback from the community. Then I tried tutoring a 10 year old friend of the family with the hope that this was going to kick off my new career as Miracle Teacher. He was perfect student material, excited, full of ideas and a game nerd. We had ten 1 hour sessions and I tried to cover a few new topics in each.

Perhaps I do enough ‘life tutoring’ with my own children. Perhaps, in my head, I imagined him hanging on my every word, then rising to greatness and surpassing his teacher. Perhaps I’m just a miserable old git but the process didn’t fill me with the joy I was hoping for. I think I just lack patience. “Come on! Hurry up and learn!”. If said child is reading this, you were great, it’s me that has the problem.

In the end I put tutoring to one side and decided to make some stuff for myself. I’m hooked. If I were the internet I’d call it ‘addicting’. There’s something amazing about the challenge of creating something compelling using low tech. Trying to recreate my past favourite games, every sprite and every screen, on a system that really wasn’t designed for this purpose.

I’m sure some colleagues would call me masochistic but I had similar enjoyment making games for Sky (yes the people wot give you tele). There’s so few moving parts in the system that after a while you get to know every function call and all the tricks to maximise performance.

And then every now and then you’ll learn something new and it opens up a world of opportunity. I never worked professionally on 8 or 16 bit machines but I’m sure it was the same feeling. Of course having hundreds of random 10 year old kids tell you how amazing you are is nice… but that’s DEFINITELY not the reason why I enjoy it…

There’s a few other professional programmers in there, the famous ‘Griffpatch’ for example who has over 8 million views on his 2d Minecraft. But mostly it’s an open playing field and it’s quite possible to make something no one has ever seen before. I wouldn’t recommend it for just general prototyping. The return on investment just isn’t worth it but as a low tech challenge with a large audience it’s ideal.

I’m still making things occasionally but have been too busy to do much recently.
You can find me (and my son) here https://scratch.mit.edu/users/Finlay_Cool/
Nothing is cooler than telling people how cool you are.

But I REFUSE to teach you anything. BAH!